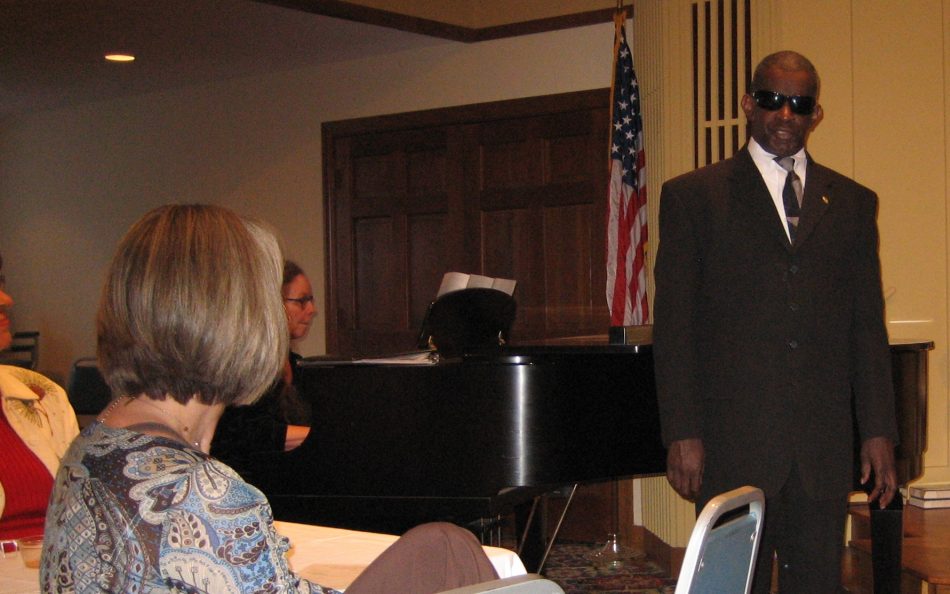 Our Friday Feature is about Dr. James Longmire. For more than 15 years, Dr. Longmire has been a part of The Center for Volunteer Caregiving’s community. He is an accomplished vocalist who teaches voice lessons in his Raleigh voice studio and is known for his incredible performances.

“If your taste runs to solid musicianship and drama, you are well advised to seek out the next appearance by James Longmire,” a CVNC review from Paul Williams about Longmire’s 2013 performance at St. Paul’s Episcopal Church.

Dr. Longmire is performing at the Dreamfest event on January 14 at 7 p.m. at The Cary Theater. His program selections include Deep River, Hold On and Scandalize My Name. The free performance is part of The Town of Cary’s Dreamfest Social Justice Open Mic Poetry Night.

Dr. Longmire and The Center for Volunteer Caregiving

Dr. Longmire became a Care Receiver with The Center in 2000. He is visually impaired and over the years, Dr. Longmire received care from three volunteers. Most recently, Dr. Longmire was matched with Mary Williams-Stover and her son.

Their story was highlighted by The Cary Magazine in 2011. Mary and her son started taking Dr. Longmire to the grocery stores just once a month. As their time together grew, their relationship deepened. Today Dr. Longmire is like a part of the Williams-Stover family.

“He’s able to live independently because of the support of The Center,” Williams-Stover said.

We are excited our friend Dr. Longmire will be featured at the Town of Cary’s Dreamfest event. Stay tuned for pictures and video to be added to our Friday Feature post.

Dr. James Longmire holds three degrees in music, his education culminating in a Doctor of Musical Arts from the University of South Carolina. Dr. Longmire has had a distinguished career in opera, oratorio and song recital. He is active as a recitalist and oratorio soloist in the Triangle. He appeared as guest soloist in Handel’s Messiah at St. Martins-in-the-Fields and is known for his interpretations of Vaughan William’s Five Mystical Songs, Mendelssohn’s Elijah, Haydn’s Lord Nelson Mass and Bach’s Mass in B Minor. Dr. Longmire has taught singing for more than 30 years and currently has a teaching studio in Southeast Raleigh. He has been on the faculty of North Carolina State University, Shaw University and Campbell University. He is well known for his master classes and vocal clinics throughout the state.